You may have heard the name Conor McGregor, especially if you’re a fan of MMA fighting. But how much is Conor McGregor really worth? Let’s take a look at his life, net worth, and other facts to get an idea of what he’s earned since becoming popular in the UFC fight circuit.

Conor Anthony McGregor is an Irish professional mixed martial artist and boxer. He was born on July 14, 1988, in Dublin, Ireland. At 12, he began training at a boxing club after excelling at sports, especially soccer.

Having grown up in a working-class family, Conor attended a plumbing training program while training in mixed martial arts with his friend, Tom Egan, who became a UFC fighter. At the age of 18, Conor Mcgregor had his first amateur MMA fight. His victory that night was a first-round knockout. In February 2013, the UFC announced that it had signed a multi-fight contract with McGregor.

Conor McGregor’s net worth is as big as his personality. The 30-year-old UFC fighter was born in Dublin, Ireland, and was poor most of his life. But those around him saw this intense fight inside him. Everyone knew he wouldn’t be satisfied with living and dying poor in Ireland.

In fact, while he was trying to establish himself as a professional fighter, it was his girlfriend who had to act as his personal chauffeur because he didn’t have a car. He would work 12-hour shifts as an apprentice plumber and then go straight to the gym to train.

To say he worked hard would be an understatement. He eventually had to give up the plumbing to train full time. It was a decision his parents disapproved of. His father and he actually got into a huge fight, which prompted Conor to say, “You’ll be sorry when I’m a millionaire.”

Conor lied to his father that day. He’s not a millionaire. He’s a multi-millionaire. After joining the Ultimate Fighting Championship in 2013, Conor made quite the name for himself.

Not only did he kick butt inside the octagon, but he also created this larger-than-life character, similar to what you’d see in professional wrestling. In 2015, he won the featherweight division title, and then one year later he became a two-division champion by winning the lightweight.

He followed that up by famously challenging Floyd Mayweather Jr. to a boxing match in 2017. Obviously, Conor lost the fight, but the $85 million he made from the fight probably numbed the pain of defeat.

Conor McGregor, the famous UFC star, has an estimated net worth of $200 million. He is also one of the highest-paid athletes in the world.

His biggest payday was from his 2017 boxing match against Floyd Mayweather Jr., where he earned over $100 million including pay-per-view revenues and sponsorship deals for that single fight.

In addition, he received $50 million from his fight against Khabib in October 2018.

Conor McGregor founded Irish whiskey distiller Proper No.12 in 2018. The Irish whiskey Proper No. 12 brand has been available in eight countries, including the U.S. It is estimated that he sold his majority stake in Proper No. 12 to Proximo Spirits for $150 million in April 2021. 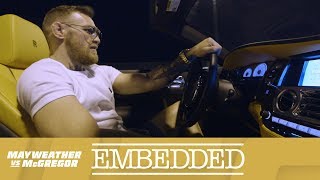