Bill Gates’ net worth is mind-boggling. The 63-year-old American business magnate, investor, author and humanitarian was born in Seattle back in 1955. Bill Gates had a fairly normal upbringing.

His father, William H. Gates was an extremely successful lawyer and his mother Mary served on the board of directors for First Interstate BancSystem and the United Way.

And while most kids were playing baseball, picking their boogers and mastering the art of sarcasm, Bill Gates was learning all about computing. When he was just 13-years-old, he wrote his first software program on his school’s computer, and by the time he was in high school, he helped computerize his school’s payroll system. We’re sure his teachers appreciated that.

At the age of 17, Bill Gates’ net worth was very little, but that was about to change. He teamed up with his business partner Paul Allen to form a venture named Traf-O-Data. He then graduated high school in 1973.

You shouldn’t be surprised to learn he was a National Merit Scholar, scoring 1590 out of 1600 on the SAT. He enrolled at Harvard later in 1973, where he spent most of his time on the computer. Understandably, he wasn’t all that interested in other subjects.

Remember business partner Allen? Well, he convinced Gates to drop out of college to start a business. That business was Microsoft. They created the company in 1975, which means Gates was just 20-years-old at the time.

In 1980, they were approached by IBM with a proposal that Microsoft write the BASIC interpreter for their personal computer launch. Gates and Allen received a one-time fee of $50,000 for their work creating the operating system.


As the 1980s continued, Microsoft introduced the operating system Windows, which ended up dominating the personal computer market. At one point, it had over 90% market share, which made Gates a very rich man in a short amount of time. As of 2019, Bill Gates’ net worth reached $98.6 billion.

That’s right…we’re talking billions here. He’s the second richest person in the world, only behind Amazon CEO Jeff Bezos, who is worth around $130 billion.

Bill Gates gave a lot back to the community. In 2017, it was reported that he gave at least $4 billion to charity. He and his wife Melinda founded the Bill & Melinda Gates Foundation back in 2000. In total, it’s estimated Bill has given away over $20 billion to charity.

Like Conor McGregor, Gates has continued to fight to stay ahead of the tech industry. Hopefully, that fight will only increase Bill Gates’ net worth! 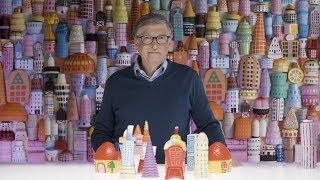