When you think of Marvel Comics, chances are you instantly think of Stan Lee and his characters. Sadly, as you might have heard, Lee passed away recently at the age of 95. His millions of fans will miss greatly him. For many, Lee will live on forever in the characters he created. What better way to honor him than by remembering the characters we’ll never forget?

While Lee is known for being the grandfather of superheroes, it wasn’t always that way. As a teenager, he started working for Timely Publications as a “gofer.” Eventually, he worked his way into writing for their comics. From those humble beginnings, he revolutionized the comic book industry in the 1960’s and created a foundation for other comic book writers and artists to build upon. Many of his characters have become pop-culture icons, branching out into toys, video games, cartoons, and live-action films.

Lee’s ability to create realistic, relatable characters with weaknesses and flaws proved his most powerful strength. Though they had extraordinary powers, they were people just like all of us, which made them even more real and beloved. Over the years, he’s created hundreds of superheroes and super-villains (Asbestos Man, anyone?), but of course, only a handful we’ll never forget.

We’ll miss you, Stan Lee; thank you for everything! 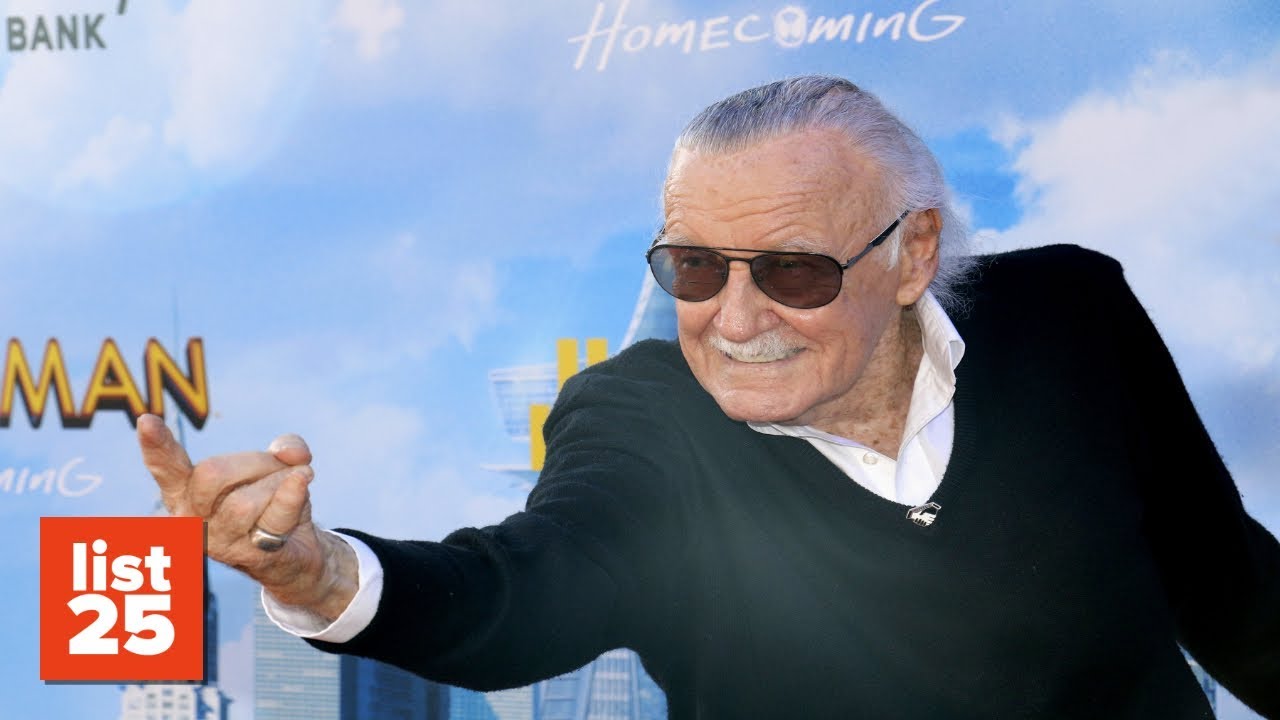 Introduced on November 1961 in The Fantastic Four #1 issue, these titular heroes became some of the Stan Lee’s most read and beloved of all time. Including Mr. Fantastic, the Invisible Woman, the Thing, and the Human Torch, these four heroes obtained their powers through cosmic rays and teamed up to fight Doctor Doom among many other villains. With their increased popularity, their stories went beyond the comic book page and to the television and silver screen. Doctor Stephen Vincent Strange was created and illustrated by Steve Ditko but scripted by Stan Lee. He first appeared in Strange Tales #110 in 1963. It’s said Lee based the character off of the Chandu the Magician radio program back in the 1930’s.

His psychedelic sorcery instantly set him apart from the heroes who had science-based origin stories, but it was also the very bizarre, transcendental stories that made him memorable and unique. During the early publication of the comics, many wondered if the Marvel writers were pot heads because the strange places the stories would go.

Since his inception, he has become a prominent character, interweaving in and out of several other comics, television shows, and of course, eventually having his own film in 2016. This crotchety Chief Editor of the Daily Bugle first appeared in The Amazing Spider-Man #1 and has always been against Spider-Man, calling him a costume freak and public menace. Though he wrote articles turning the public against the web-slinging hero, Spider-Man always found a way to thwart and embarrass the hot-headed journalist. Funny enough, it’s said Jameson was inspired by Stan Lee on how his readers might perceive him. The first panel he appears in shows Jameson hunched over a typewriter, frantically typing. This scientific genius was created by Stan Lee and co-created and drawn by Jack Kirby. His alter-ego, of course, is Ant-Man, a superhero who can change his size. Hank Pym first appeared in the Tales to Astonish issue 27 which was released in 1962, but he didn’t appear as Ant-Man until issue 35. In the Marvel comics, he’s a gigantic figure who was a founding member of the Avengers and creator of the villainous Ultron. Created by Stan Lee, Don Rico, and Don Heck, this deadly assassin first appeared in Tales of Suspense #52. Originally a KGB agent, she helped and fought many of Marvel’s mightiest heroes, including Hawkeye, Spider-Man, Daredevil, and Iron Man. Of course, she later joined S.H.I.E.L.D. as a double agent and then the Avengers. Though she doesn’t have any super abilities, she was one of the best agents S.H.I.E.L.D. ever had. Created to be a World War II character in the comic issue of Sgt. Fury, two years later, Lee updated the character to be in charge of S.H.I.E.L.D. in Strange Tales. A strategic mastermind and natural born leader, Fury forges alliances with the Avengers and Captain America to fight the world’s worst villains. His character has weaved in and out of various comics over the years, becoming prominent on the war against evil. He first made an appearance on television in David Hasselhoff’s failed Nick Fury, Agent of S.H.I.E.L.D. show, but more recognize him in Samuel L. Jackson’s performance throughout the many Marvel Cinematic Universe films. First created by Stan Lee in 1963 to be the metal manipulating mutant antagonist in the first X-Men issue to fight against the titular team, Stan Lee later admitted he never thought of Magneto as a villain, but a man fighting back against bigotry and racism, trying to defend his fellow mutants. He also originally planned to have him be Professor X’s brother rather than an old friend. Either way, he has since become one of the well-known Marvel villains, heavily featured in the comics, cartoons, and films. First appearing in the Fantastic Four#52 issue in 1966, this wealthy, intelligent, and super-powerful hero is named T’Challa, king of the technologically advanced nation of Wakanda. In this first issue, Stan Lee wrote a story of how T’Challa invited the Fantastic Four to Wakanda and individually neutralized them with his superhero abilities, testing them to see if they’d be valuable allies against his nemesis, Klaw.

Since that first issue, he has become a massive superhero character and played prominent roles in several other superhero comics, like X-Men and the Avengers. This crime-fighting hero of Hell’s Kitchen first appeared in the Daredevil #1 issue. Originally, his costume was yellow and red, but it was totally redesigned in issue 7 to the red costume he’s known for today. Stan Lee imagined him as a kind of “Scarlet Swashbuckler” who was also an impressive gymnast and boxer. However, much of his backstory and origins were altered and changed as the comic progressed. Often considered Stan Lee’s “favorite villain,” Doctor Doom first appeared in Fantastic Four Vol. 1 issue 5 in 1962. He initially fought against the Fantastic Four but later became a villain for many of Earth’s mightiest heroes. The length and breadth of his powers are almost unlimited, and he proves time and again to be a formidable foe. Outside of comics, he’s made appearances in many cartoons, video games, and live-action films. Both Stan Lee and Jack Kirby created the Hulk, and he first appeared in The Incredible Hulk #1 issue. His character was inspired by the stories of Dr. Jekyll and Mr. Hyde as well as Frankenstein. Lee wanted Hulk to have gray skin initially, but that turned out problematic for the printers so they switched it to the green skin he’s known for today. With a massive line of comics and comic appearances, a popular TV show, and several movies, the Hulk is one Lee’s most recognizable and popular superheroes. Making his first appearance in Tales of Suspense #39, Tony Stark/Iron Man was the creation of Stan Lee and Jack Kirby. His character was loosely based on the life of Howard Hughes, and his early character fought against the Communists, championing risk and hard work. Iron Man quickly became a pillar of the Marvel comics mythos and branched out into cartoons and live-action films. The live-action films starring Robert Downey Jr., of course, thrust him into a whole new level of popularity. Out of the desire to create a team of superheroes but not explain their origins, Lee stated he took the easy way out and said they were all “mutants.” Indeed, even the original title for the comic was “The Mutants,” but that was shelved when they realized their readers wouldn’t know what a mutant was. The original members of the team were Beast, Angel, Cyclops, Iceman, and Marvel Girl (Jean Grey). Without a doubt, Spider-Man is, and always will be, Stan Lee’s most popular, iconic, and amazing superhero. With increasing demand from teenagers for comic books, he wanted to create a character that teens could relate to and came up with the spider idea after watching a spider crawl up a wall. The character was first introduced into the Amazing Fantasy issue #15 as a timid and shy high schooler, making him stand apart from the adult superheroes of the time.

Since then, he’s become Marvel’s most popular superhero, branching out into toys, video games, cartoons, and live-action films.