During the high and late medieval period, a building style characterized by the use of pointed arch, flying buttress and ribbed vault became popular in the construction of abbeys, cathedrals and churches in Europe. Gothic architecture originated in 12th-century France and lasted until the 16th century and remains to be the building style adopted in the design of several universities, guild halls, palaces and castles up to this day. While this type of architecture grew out of an earlier architectural genre known as Romanesque Architecture, some of its notable features reveal a tinge of Islamic influence. During the Gothic period, the designs of ecclesiastical buildings were known to exude a sense of faith or civic pride. A great number of such churches have survived the era and are still used today, particularly in Italy, France and Spain. Here is a list of 25 overwhelming examples of Gothic architecture. 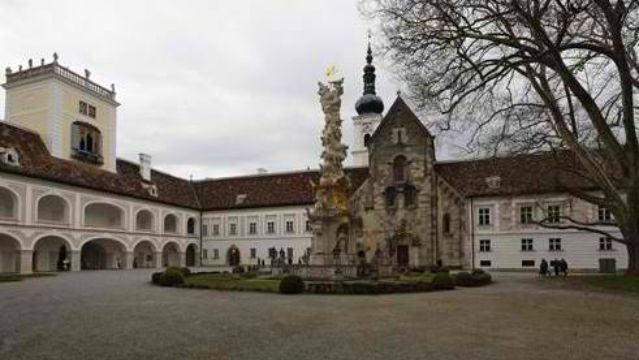 Embodied in its Romanesque and Gothic components, the Heiligenkreuz Abbey is a classic example of the continuity of the European monastic tradition. The typical features of this monastery complex—including its cloister and living quarters, interiors and furniture– reflect the Gothic architectural history of Austria during the medieval times. 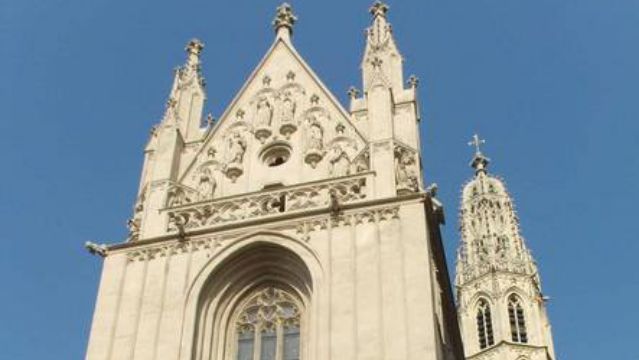 Maria Am Gestade was originally a wooden structure constructed by the boatsmen of Austria. In 1394, this wooden building was restructured into a perfectly shaped Gothic beauty, remarkable for its steep ground, narrowness, and pretty stained glass at the back of its Gothic altar. This building was used by Napoleon as a storehouse for its weapons and stall for its horses in 1850. 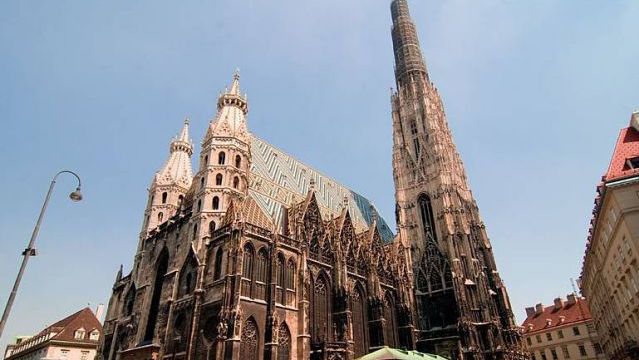 Considered as the most eminent Gothic edifice in the whole of Vienna, St. Stephen’s Cathedral is where most of Vienna’s art treasures lie. Its Gothic style is apparent in its pulpit, red marble sepulcher, and its Gothic-winged altar that was completed in 1447. 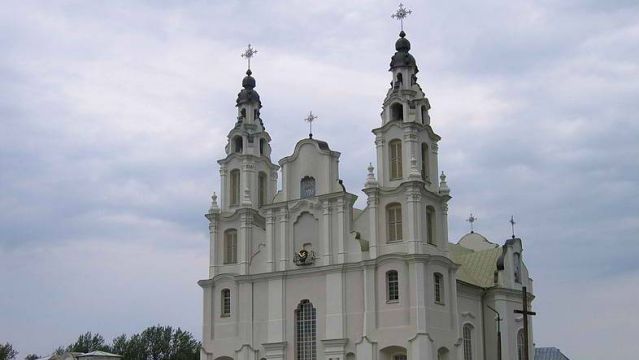 Built during the 16th century, the Church of St. Michael in Synavichy, Belarus is one of the first fortified churches in the Grand Duchy of Lithuania. This three-nave, four-pillar structure was built during the time of Queen Bona and largely features characteristics of Gothic architecture. 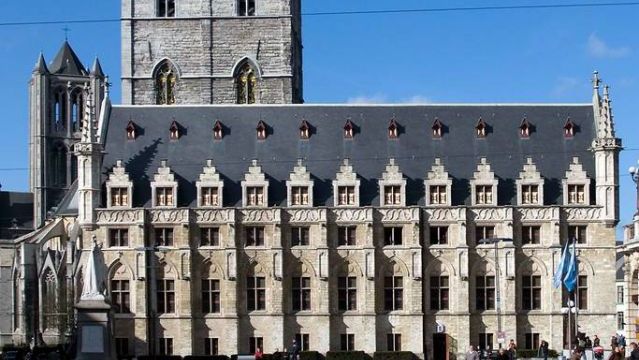 Known as the tallest belfry in existence today, the Belfry of Ghent is one of the three medieval towers overlooking the old city of Ghent, Belgium. It was designed by master mason Jan van Haelst and was completed in 1380, almost seven decades since its construction. This edifice is remarkable for the primary bell in its tower.

Church of Our Lady of Bruges. Bruges, Belgium. 13th century 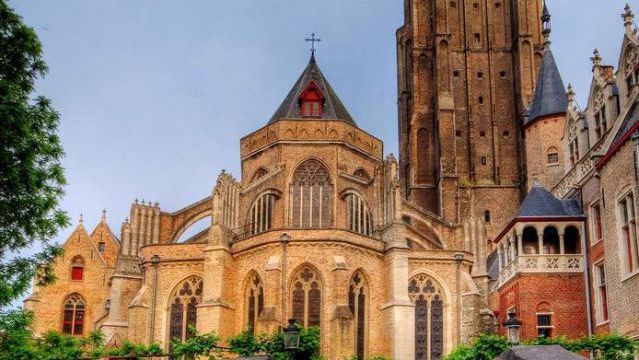 Known as the “high spot” of medieval art in Bruges, the 122-meter brick steeple of Our Lady of Burges dominates the skyline of the city. It houses a wealth of art collections in Belgium, including the “Madonna and Child” by Michelangelo and the ceremonial tombs of Mary of Burgundy and Charles the Bold. 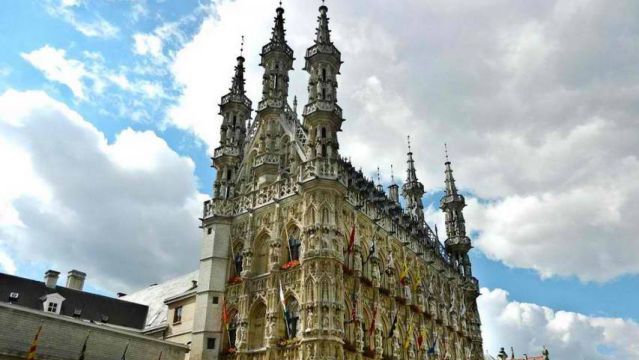 One of the most popular Gothic town halls around the world, the Leuven Town Hall in Belgium is known for its harmonious dimensions and for the rich decoration of its walls. The architect behind the Gothic look of this building was Mathijs de Layens. 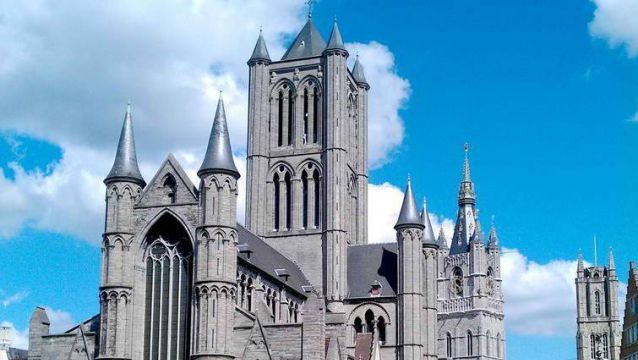 One of the most beautiful and oldest churches in Ghent, St. Nicholas’ Church is also known as the Sint-Niklasskerk in Flemish. This ecclesiastical edifice is located near the Belfry Tower in the historical centre of Ghent and was built on the basis of Scheldt Gothic architecture. 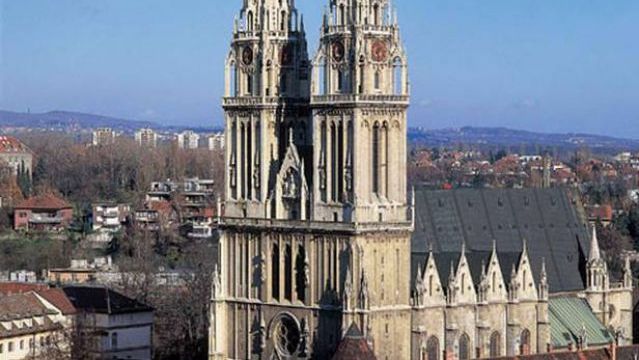 Remarkable for its ground plan and slender cross-ribbed arches within three polygonal apses with narrow windows, Zagreb Cathedral is considered as the most impressive and monumental Gothic-style sacral building in the southeast of the Alps. Its features reflect the introduction of Gothic style to Croatia as well as the internationalization of art. 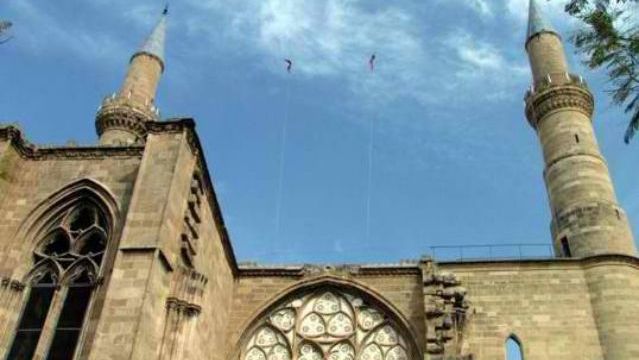 Also known as the Selimiye Mosque, St. Sophia Cathedral is considered as one of the best examples of Gothic art in Cyprus. The oldest Gothic mosque in the country, it was built by French masons who accompanied the crusades. Is most remarkable features are its monumental main door and the carved stone window above it. 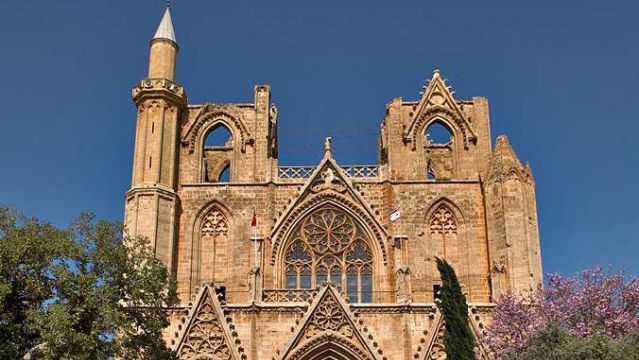 A 13th century cathedral Lala Mustafa Pasha Mosque is a classic example of the French Gothic architectural style not just in Cyprus but in the Mediterranean works. The largest medieval building in Famagusta, this mosque took almost a century to complete. Its Gothic architecture resembles the great cathedral of Rheims in Paris, France. 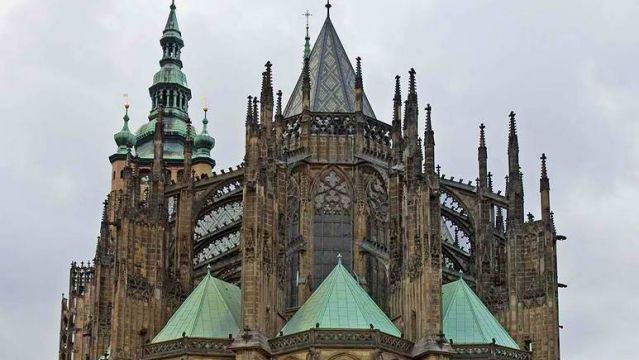 Known as the largest and most important cathedral in Prague, Czech Republic, Saint Vitus Cathedral serves as a place of interment of the remains of prominent people in Czech, including archbishops, saints, and noblemen. Its neo-Gothic part is best revealed in its main nave and narrow side aisles. 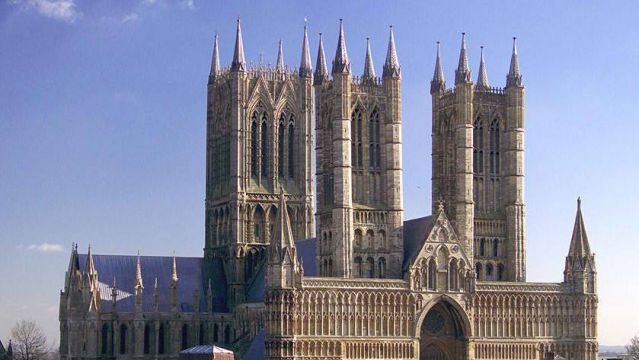 The Mother Church of the Diocese, Lincoln Cathedral is the parish church of England and serves as a place of national heritage and centre of international pilgrimage. It is widely considered as the most precious piece of architecture in the British Isles and is most remarkable for its nave and rise windows. 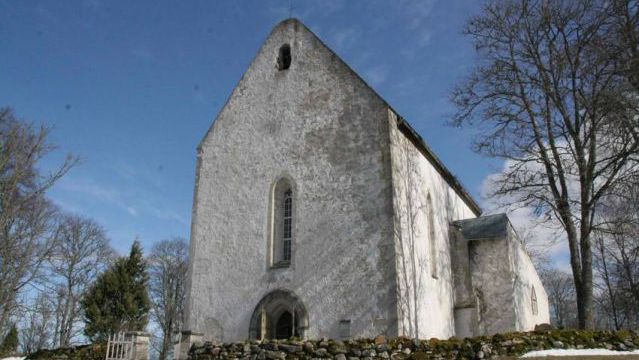 Built in the beginning of the 14th century, Karja Church is a one-naved church that does not have a bell tower. On top of its altar are Pagan-ish magic ceiling signs that were painted during its construction. Most of the features of Karja Church show elements of high Gothic architecture combined with Romanized lines. It is also considered as one of the richest forms of sculpture throughout Europe. 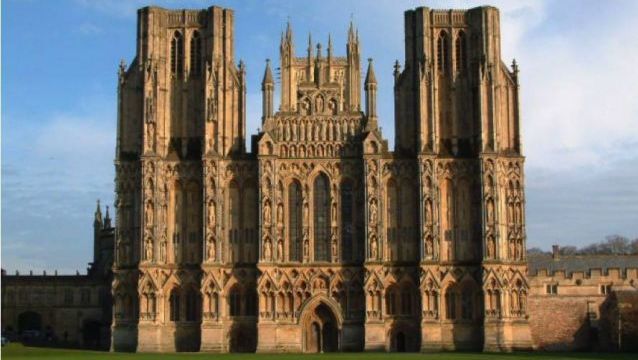 Wells Cathedral was the first major English cathedral built in England. Its façade appears like a glorious decorative screen as it laterally stretches out. The original cathedral also had richly painted niches and buttresses and glided stone figures, as well as towers placed beyond its sides. 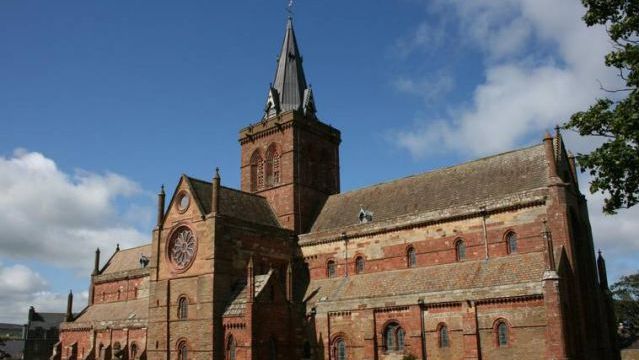 St. Magnus Cathedral is a north-west European Romanesque building that also features some touches of Gothic architecture. It is known as the best preserved medieval cathedral in the whole of Scotland, characterized by its massive Normal pillars that resemble those of the Durham Cathedral. 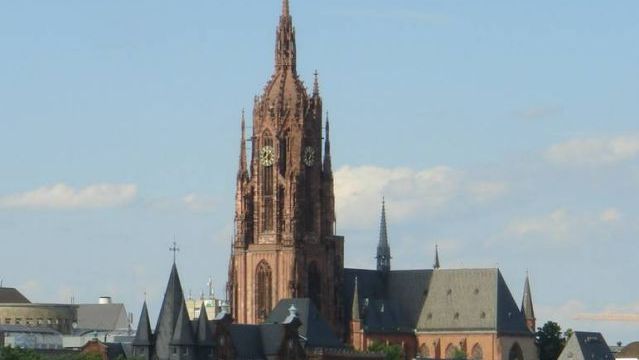 Built between the 14th and 15th centuries, Frankfurt Cathedral in Germany was constructed upon the foundation of an even earlier church. This Roman Catholic Gothic church is dedicated to Saint Barholomew and holds a truly impressive Gothic architectural style because of its pink glow and walls of sandstone. 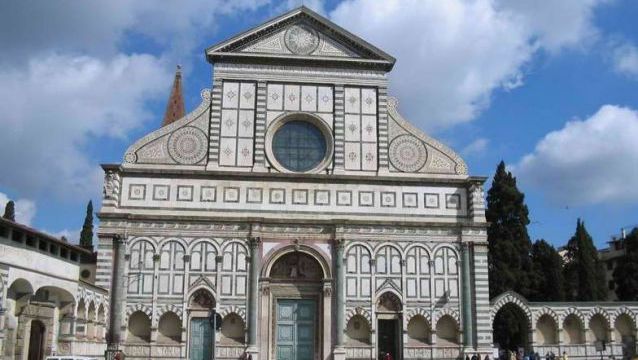 Located in Florence, Italy, the Basilica of Santa Maria Novella is one of the most important Gothic churches in Tuscany. Its exterior was designed by Fra Jacopo Talenti and Leon Battista Alberti, while its interiors reveal extraordinary works of art including the fresco style of Ghirlandaio. Orvieto Cathedral in Umbria is one of the most celebrated Gothic cathedrals in the whole of Italy. It is situated atop an isolated rock that stands 195 meters above the junction of Paglia and Chiana Rivers. It is remarkable for its silver shrine and west façade characterized by a fine polychrome monument of sculptured marble. 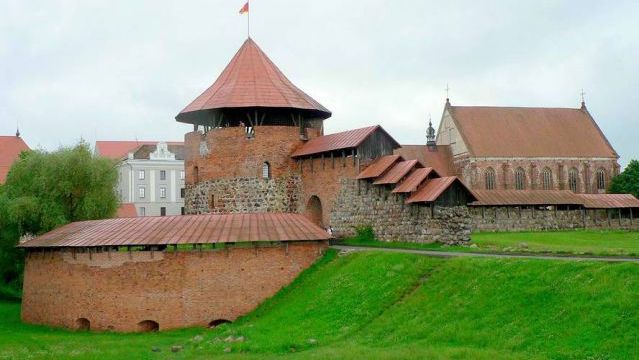 Kaunas Castle is a stone castle that was constructed at the confluence of Neris and Nemunas Rivers against the attacks of the Crusaders. The first stone castle in Lithuania, this castle played a significant role in the defense system of the country. This Gothic building has two rows of protective walls and is the only one of its kind in Lithuania.

Church of Our Lady of Breda. Breda, Netherlands.1410 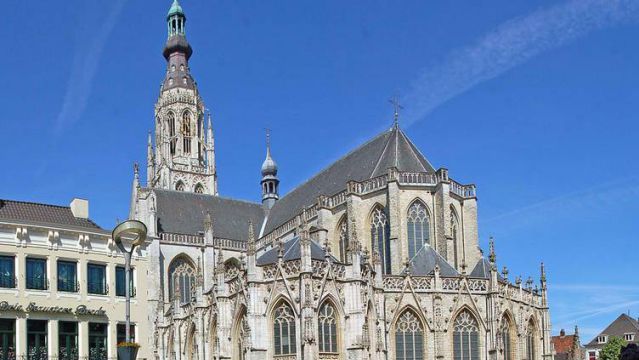 Considered as the most important Gothic monument in Breda, the Church of Our Lady Breda was built in the Gothic style Brabantse Gothiek. It has a 97-meter tower and a floor plan that follows the shape of a Latin cross, which was very typical of Gothic cathedrals at the time. 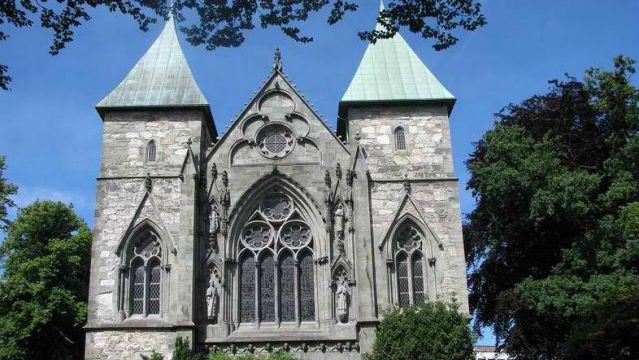 The Stavanger Cathedral was built during the 11th century and was originally built in Anglo-Normal style by English craftsmen. After it was damaged by fire in 1272, the cathedral was restored and built in Gothic style. It is considered as the only Norwegian cathedral that has retained its original appearance since the Middle Ages. 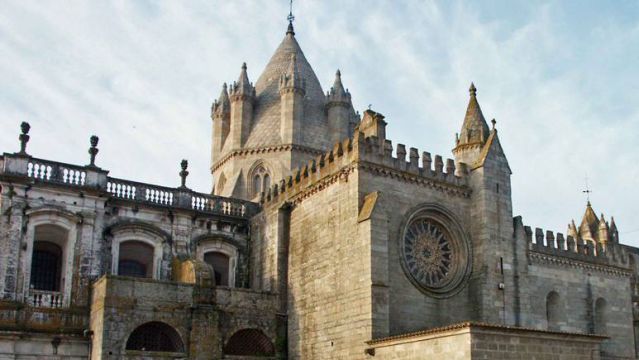 A Romanesque-Gothic cathedral in Portugal, the Cathedral of Evora is best known for its many unique architectural elements and wealth of valuable treasures. It has a heavy stone façade flanked with two cone-topped, battlemented square towers as well as a detailed porch and central window. 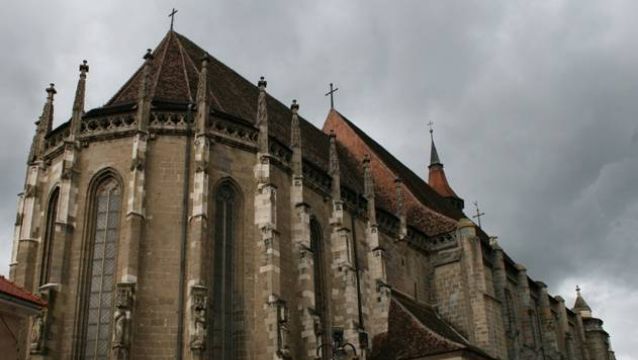 The Black Church of Transylvania is the largest Gothic ecclesiastical building between Vienna and Istanbul. A Roman Catholic church, it was originally dedicated to Virgin Mary but became a Lutheran church after a century. It is built of friable grit stones and andesite arranged in cubic shape. 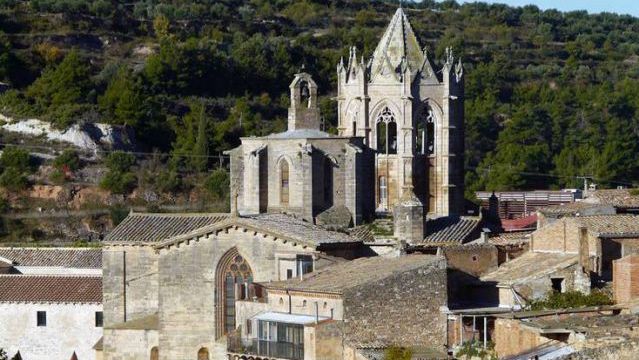 The Monastery of Santa Maria de Vallbona is one of the most significant monasteries in Catalonia, Spain. It is a Cistercian abbey and was founded in the early 12th century. This is a classic example of the transition between the Romanesque and Gothic architectural styles.