25 Most Haunted Roads We Dare You To Drive On

With bad conditions, most roads can be dangerous to drive down, but add the element of being haunted, and you’re in a whole new world of terror. You might be surprised how many haunted roads exist in the world. From strange noises to ghostly sightings, people driving down these creepy roads have reported plenty of paranormal activity. Some of these roads are so strange that they’ve garnered the attention of journalists and other investigative organizations. So, be wary, and know what roads you’re driving down; they very well could be one of the 25 Most Haunted Roads We Dare You To Drive On. 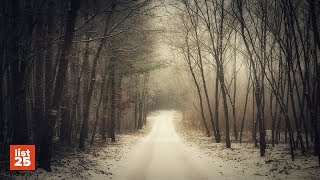 This road located in Passaic County, New Jersey, is said to be full of Satanic activities, witch and druid ceremonies, and KKK meetings. Once you make a sharp turn around on “Dead Man’s Curve,” you’ll cross Ghost Boy Bridge where it’s said if you drop a coin off in the water, a ghost boy will throw it back.

This road in Maine is so haunted, a song was written about it called “A Tombstone Every Mile.” Truckers have died slipping on the icy roads, and many travelers have claimed to see a ghostly woman screaming that her husband is trapped in their car.

The story goes that in New Orleans, a young girl named Mona fell in love with a sailor but was murdered by her father for having the affair. Since then, her ghost haunts young lovers as they walk hand-in-hand down Mona Lisa Drive.

Yes, that is the actual name of the road. And yes, you’re crazy to go driving down it. Located in New Jersey, it’s not entirely known how it earned its foreboding name. Some say it was originally called “The Shades” but after a number of murders happened there, possibly by murderous bandits, local residents added the warning “of Death.” Others claim it was a naturally dangerous road and at one time had an outbreak of malaria carrying bugs.  Whatever the case may be, we’re certainly keeping a wide berth.

In San Antonio, the intersection of these two roads has a train track running down it and as you must suspect, the intersection is haunted. The story goes that a school bus full of children collided with a train while crossing. Since then, the ghosts of the children push cars over the train tracks to avoid hitting the trains.

Driving after dark on this winding road in California, a couple of guys suddenly saw a clown figure. They pulled over and got out to investigate, but as they walked toward it, it moved away from them and vanished. When they went back to their car, they could hear the sound of a clown laughing. Needless to say, they quickly got out of there.

Officially called Lawler Ford Road in Wildwood, Missouri, this road was a popular hangout by teenagers in the 50’s. Over the years, have been so many paranormal sightings and people claiming to see “ghost lights,” it was unofficially renamed to Zombie Road.

This road in Ohioville, Pennsylvania, runs through a thick, creepy forest some say is the site of weird cult practices. Locals have claimed to hear strange noises and believe the cult caused quiet and peaceful animals to go rabid and violent, attacking people and other animals.

This tunnel was once part of a railroad before being abandoned. It’s now covered in moss and graffiti, and many tales of it being haunted are told throughout the area. But you probably guessed that from the name alone. One story claims a dead man was found inside the tunnel with a look of fear stuck on his face and that his ghost still haunts the place.

On November 19th, 1965, a bride on the eve of her wedding day was with her friends when the worst happened. They were in a fatal car crash on A229 Road in Kent, England. Since then, there have been over 50 reported sightings of her ghost. Many have considered it one of the creepiest roads in the United Kingdom.

Under Washington Street lies this haunted section of Boston where it’s said that Margaret Jones was tried and hanged by the Puritan court for being a witch. Since then, many have claimed her vengeful spirit lurks in the shadows, preying on the poor victims walking through it.

Similar to many other haunted roads, this one involves a red-headed hitchhiker who tragically died in a car accident and now haunts this route. For the past thirty years, she’s been seeking a ride from anyone who will take her. Other stories tell of a bearded man who might appear in your backseat and laugh maniacally.

This unpaved road in Stevens Point, Wisconsin, was owned by the Boy Scouts of America, and one day when a troop camped in the area, they were all murdered by their camp leader. Since then, their spirits have been unable to cross over, or so the story goes.

This road in Chicago, Illinois, weaves in and out through plenty of spooky forests, lakes, and graveyards. From phantom monks haunting the area around St. James-Sag to the “Grey Baby” at Sacred Heart Cemetery, this road is full of terrifying tales, including the famous Resurrection Mary. She was one of the most famous ghostly hitchhikers in history and has been said to scare motorists for decades.

A desert road running northwest and just east of the Nevada border, it’s officially called Highway 93, but it received its nickname after many tragic deaths. One story tells of a ghostly highwayman that walks up and down the road, carrying a lantern. He’ll suddenly appear before vanishing into the darkness.

Located in Dartmoor, England, this road carries a notorious tale of ghostly, hairy hands that grab a driver’s steering wheel, forcing them off the road. Others have claimed the hirsute hands were pressed against their windshield. Whatever the case, probably best to steer clear of this cursed road.

Down in Saratoga, Texas, lies this road that some call “Ghost Road.” If you drive down this road at night and turn off your lights, you might just see a glowing blue light in the distance. Many believe this is the lantern of a groom who went looking for his newly betrothed wife.

Rumors of a “Spook Light” wandering around this stretch of road near the Ozarks in Missouri have spread like wildfire. They’ve become so prominent journalists and the Army Corp of Engineers have come out to investigate it. Still, no one really knows what it is or where it came from.

Many accidents and deaths have happened on this windy and treacherous road; few in the area believe it happenstance but instead the act of a vengeful ghost. Hovering off the ground and dressed in raggedy clothes, if you encounter this spectre, he supposedly tells his victims, “Get off my claim.”

A girl walking down this road in New Jersey was said to be in a hit and run. Since then, her ghost has haunted it, appearing before travelers like she was real and then vanishing right before their eyes.

If you drive this through tunnel in Canada, you might just hear a blood-curdling sound. The story goes that if you light a match in the middle of the tunnel, it’ll instantly go out, and you’ll hear the sound of a dying girl, screaming. The tunnel is just at the corner of Niagara Falls, Ontario, if you dare enter.

Located in Michigan, this road has a couple of varied stories about a mother and her child. In one instance, a spirit of a woman wanders up and down the road looking for her lost child, while another story says the woman abandoned her baby on the road. Many have reported hearing strange sounds and even the wail of a baby while driving down the road in the middle of the night. For this reason, people also call it, “Cry Baby Road.”

Built by the British in 1977 while they still controlled Hong Kong, several stories have been reported of ghosts suddenly appearing on the highway, causing traffic to veer and collide. Many fatal collisions have occurred as a result.

After a number of strange occurrences, this road has been named one of the spookiest in the United Kingdom. People have claimed the ghost of a white haired old woman appears on the road, and others say a false road led them off to the right.

Also called “Killer Road,” over twenty-five lives have been claimed on it. Since its construction, stories of a ghostly monk haunting the area have persisted. Some have also said they’ve seen the ghosts of little children singing eerie lullabies.