One would assume that when making a product for children, the safety and well-being of said children is of paramount concern. Disturbingly, that is not always the case. We’re not sure if people are stupid or ill-intentioned, but some toys that have actually made it to shelves just make you wonder what the professional qualifications for toy inventor and manufacturer are. Here to amuse and horrify you are 25 Most Dangerous Kids Toys Ever Made. These “toys” were released in 2007. They unfortunately contained a form of asbestos as part of the fingerprint kit. Two questions: 1) HOW did that pass quality control? and 2) Who are these scores of children watching enough CSI – a show for adults – that they want a “murder investigation” toy? A class action settlement was reached in 2009. These were a really cool concept – little beads that you could arrange in whatever shape, and then stick together permanently with just water. They were also, OBVIOUSLY, not a toy for 18 month old children, and had warnings on the package to indicate such. However, in 2007 some parents let their 18 month old son play with them. He ate them, which is where the real problem comes in. The glue contained a substance that when eaten turned in GHB, also known as the date rape drug. The little boy fell into a coma, and when he woke up, had brain damage. While obviously parents should always supervise and follow age recommendations on toys, a toy should NEVER contain a substance like that. Ever.

The Gilbert U-238 Atomic Energy Lab This toy was released in 1950 by the same man who invented Erector sets (and a few other toys on this list). Atomic energy was all the rage in the 50’s, what with the US winning the Second Great War and all that jazz, but this toy perhaps took the excitement too far. It included actual live uranium ore. Three different kinds, in fact. But don’t worry, it also had a Geiger counter in case your child started to glow in the dark. This doll would eat your hair and fingers. Literally. The “munching” toy had mechanical jaws that “chewed” and a one way roller that was activated, not by a switch, but by sticking one of the plastic “snacks” in it’s mouth. The doll could not differentiate between “Snacks” and “toddler fingers,” so you can imagine how that went. Ah, trampolines. How fun are they? They’re also still wildly popular and…pretty dangerous. Yes, even if you have the net around them. In fact, if you have one, it’s considered enough of a risk that you have to inform your home owner’s insurance. The American Academy of pediatrics also advises against having them. This Barbie was, without question, one of the coolest toys of the mid 90’s. Her roller blades SPARKED when she moved! Unfortunately, this spark was not any sort of light up device, but rather actual flint sparks, similar to the inside of your standard BIC lighter. That they gave to children. To play with it. So when Barbie wanted to roller blade in one of her long princess dresses, bad things happened. This oven, in which you melted plastic and baked your own bug shaped toys in metal molds, got even hotter than an Easy Bake Oven’s 350 degrees. Not only did the unit get hot, but it made hot melted plastic, which was also toxic. But it was the 60’s, so maybe that was just a bonus feature. This toy pistol fired ping pong balls at your friends. Seems harmless, right? Well, if fired them with something called “magic crystals” (A terrible name on it’s own) which were actually made from Calcium Carbide. In case Middle School chemistry was a really long time ago, Calcium Carbide and water make a highly flammable gas that resulted in a small explosion that would fire said ping pong balls over 70 ft. Just imagine how that went. Also imagine how cool it looked to shoot fiery ping pong balls. 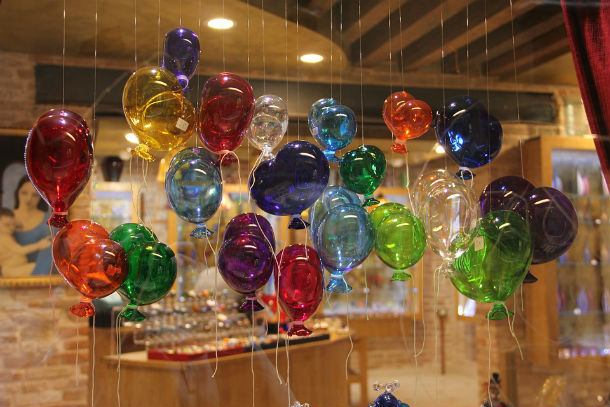 This set was another toy brought to us by the 1950’s, and it was exactly what it sounded like – a glass blowing set for children. For reference, aside from the dangers of glass when it’s cool and solid, in order for glass to become malleable it has to be about 1,000 degrees Fahrenheit. Most of us know several adults who shouldn’t even have a toy like that. Just pay your $20 bucks, go to the local ren fair, and watch the glassblowing guy. From a safe distance. For those not in the know, Sky Dancers were little fairy dolls, with wing arms. You’d sit your “dancer” in the base, pull the string, and her arm/wing things flare out, and she twirls through the sky…a hard piece of plastic, with no control whatsoever over where she goes. There were injuries. Scratched corneas, temporary blindness, mild concussions, facial lacerations and more. They were really fun. Also, they were recalled. These were really popular in the early 90’s, but they weren’t always a good idea. On one model, specifically the “Hang Ten” model from EZ sales, children suffered head and brain damage after becoming tangled in them and basically hanging themselves. The design of this specific hammock made escape difficult if not impossible. In 1996 three million mini hammocks from ten different toy companies were recalled. These shoes were really cool…and also really dangerous. Pretty much anyone who’s ever met a child, or um, walked anywhere, would look at these and say, “Gee, someone might break an ankle!” Unfortunately, the manufacturers didn’t realize that until multiple reports came in of injured children. This toy airplane blew up. As in, literally. In 2007, the company that made them had over 50 reports of them just spontaneously combusting and injuring children while in use, so they recalled them. Not only was the Bird of Paradise slingshot one of the first toys to be recommended for banishment by the Consumer Product Safety Commission, it was the FIRST that was redone due to injury risk, not due to dangerous substances. It was literally a slingshot with some razor sharp “missiles” included.

Magnetix is a toy set that lets you build things out of little magnetic balls and small plastic pieces with magnets at the end. The magnets held the pieces together. Sounds awesome, right? Some children who were not of the appropriate age to play with the toys choked, or required surgery to remove the magnets (that attracted each other once inside the child), so now none of us can have them. The same fate met Bucky Balls. Don’t try to swallow things, and don’t let babies play with toys they could possibly swallow, please! The original Slip n Slide was made for children. Not adults, children. That did not, however, stop adults and teenagers from using them. Because they are awesome. So in 1993, after 8 adult sized people had become paralyzed or had severe injury due to the abrupt stop at the end of a slip n slide, the Consumer Product Safety Commission issued a warning. Because Duh. These play places were basically a burn injury and Tetanus booster shot waiting to happen. Also split lips, concussions, etc. Thankfully, plastic has replaced most of the metal parts, and the metal pieces used now are usually coated to prevent rust. Still, make sure you’re not setting your child or yourself up for a butt burn by touching the slide and swings before playing on them on hot days. Gilbert’s Kaster Kits were brought to you by the same people who brought you the Gilbert Glass Blowing kit from earlier. These fun toy sets were very popular in the 1930’s. They let children cast their own toy soldiers! Out of molten lead.

The Belt Buckle Derringer by Mattel This toy was released in 1959. These were different times. Times when it was okay to fire a tiny plastic bullet encased in brass…that would go up to 15 feet in any random direction…that you loaded with a small exploding cap to make the “BANG” noise…from your crotch. Many a eyeball were harmed. If you think this is the greatest idea ever, though, you can still get them on ebay for around fifty bucks. The mid 1800’s believed children to be more sturdy than we do now. Or expendable. Maybe that’s why people had a dozen children. Either way, they thought it was perfectly fine to give children a toy locomotive that actually moved. Being a time before Duracell was in every home, the Stevens Company Model Dockyard Locomotive got around this by using an actual steam engine which required either kerosene or alcohol that the child then had to light to heat the water to make the steam to make the train go. Much like actual trains of the era, the Model Dockyard dripped fuel out of the back…so water mixed with kerosene…and unlike real locomotives, it didn’t have tracks. So it just peed flammable liquid throughout the house. Did we mention it was made of metal? And on fire inside? These tools were released in the 1960’s, and they were just like dad’s! No, really. They were actual, metal power tools, just child sized. On the one hand, this is a terrible idea. On the other hand, if your child is really coordinated, you could have them build you a deck. Hmm… Super Blast Balls were two balls you could smash together in your hands that created a loud noise and sparks! Basically, you were setting off caps (the small explosives that make toy guns go bang) in your hands. Who wouldn’t want to give that to small children? Yeah! In 1988, Toys R Us had to recall a writing set made for children. It was shaped like a happy yellow submarine and contained drawers for various writing and craft supplies, as well as a small razor blade. Nope, we’re not making that up. A razor blade. Let’s start this one out by saying that, reportedly, no babies died. However, Aqua-Leisure was aware that their 2002 inflatable baby boats did significantly increase the risk of that happening. The leg strap of the seat (the part that they baby sits in, that connects to the actual floating portion) tore quite easily and frequently The 1950’s were a simpler time. Paint contained lead; cars contained no restraints for children; and toys didn’t have much safety testing, if any. The concept of Lawn Darts (Or Javelin Darts or J Darts) is pretty straight forward – you get a target, you throw darts at it. The darts were sharp and weighted, so when thrown, they would stick in the ground. Those are also qualities you want in a weapon you’d throw at someone, by the way, which is probably how a little girl was killed by one in 1987. The game has been banned and revised in a slightly different version in the US several times. Currently “soft tipped” versions of lawn darts are available.