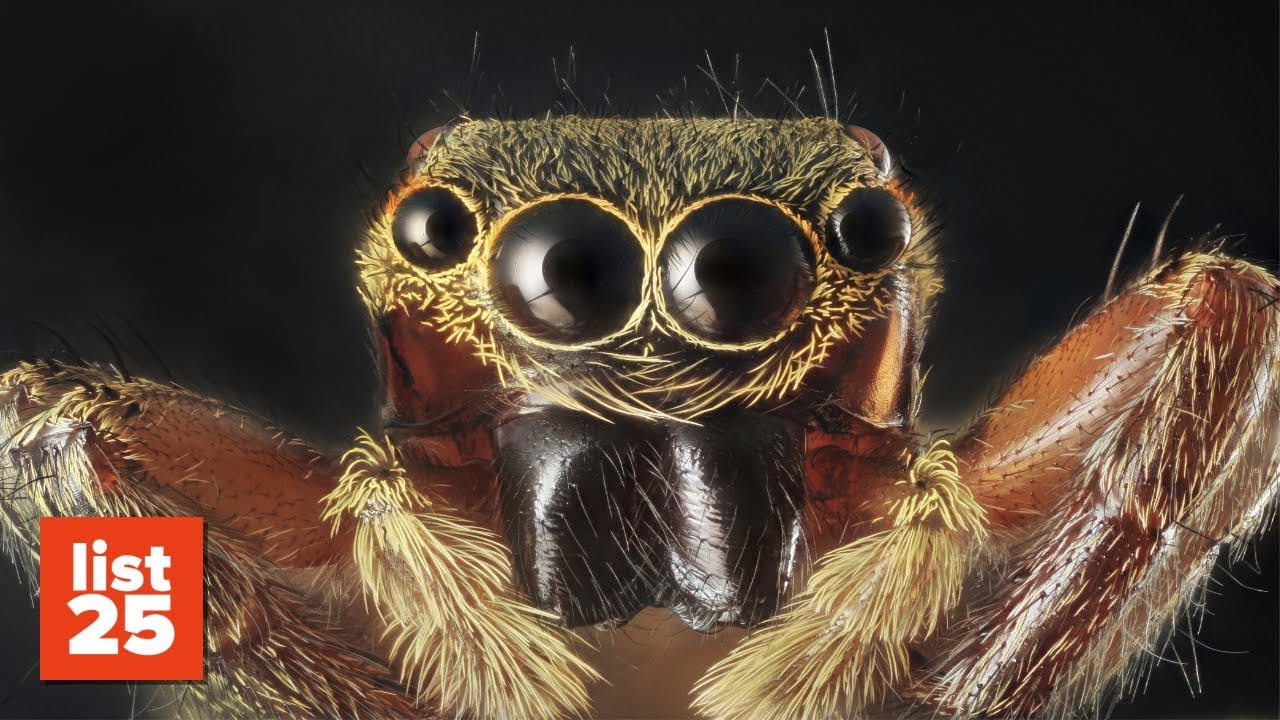 Scutigera coleoptrata, also known as the house centipede is typically a yellowish-grey centipede with up to 15 pairs of legs. It kills and eats other arthropods such as insects and arachnids, but it’s typically harmless to humans. (Though, I would still not want to wake up at 2 am with this thing crawling up my leg!)

Talking about centipedes, check out this guy. Also known as the Amazonian giant centipede, this thing can grow up to 30 cm (12 inches) and preys on arthropods, amphibians, reptiles, and even other mammals. Their venom can be lethal to small animals and causes swelling, chills, fever, and weakness to humans.

The world’s largest hornet, the Asian Giant Hornet is about 50mm (2 in) long, has a wingspan of about 76mm (3 in) and sports a massive stinger of about 6 mm (0.24 in). As you can imagine, this wasp has a particularly painful sting described as a hot nail being driven through the skin. In Japan, it’s responsible for around 30 to 40 human deaths annually. This is a bug that you’d not only not want in your bed, but not anywhere near your house, period.

Giant Water Bugs measure about 4.75 in (12 cm) long and are considered to be fierce predators, due to some bugs being known to even eat baby turtles and water snakes. Their bite is also considered to be one of the most painful bites that can be inflicted by any insect.

This enormous grasshopper is native to New Zealand and can grow anywhere between 10 cm (4 in) to 20 cm (8 in) depending on the species. This grasshopper is actually one of the largest insects in the world, and also one of the heaviest, weighing up to 2.5oz. If you find one of these in your bed, I’d just let them keep the entire bed.

The thorny devil stick insect (AKA: giant spiny stick insect) is a vegetarian that can reach lengths of up to 15 cm (6 inches). It’s normally harmless to humans, but that still does not negate its creepy appearance.

Able to lift more than 850 times their own weight (that’s about 72.25kg) and capable of reaching lengths of up to 17cm (6.75 in), the Hercules Beetle is aptly named. Impressive to say the least, but still not a good bed fellow.

Also known as the waterbug, the American cockroach is the largest species of common cockroach reaching lengths of up to 4cm (1.6 in) and about 7mm (0.28 in) tall. This critter is also considered one of the fastest running insects, able to run at 5.4 km/h (3.4 mph) (about 50 body lengths per second). That’s like a human running at 330 km/h (210 mph). Since this is a bug commonly found in many households across America, you may want to go check your bed right now; you may already have a few cockroaches in there…

Growing up to 38.5 cm (15.2 in) and sporting 256 legs, the giant African millipede is one of the largest millipedes in existence. While this millipede is not particularly dangerous or deadly to humans, it is not an insect you’d want to see in your bed.

Eight eyes, eight legs, and all sorts of scary, the giant huntsman spider can reach a leg span of 250-300 mm (about 10-12 in), the largest leg span of any species of spider. I don’t know about you, but if I were to find this thing on my bed… well, let’s just say there would not be enough fire in this world.

With the largest leg span of any arthropod (reaching up to 3.8 meters [12 ft]) and weighing up to 19 kilograms (42lb), the Japanese giant crab is a disturbingly big. These giant crabs are known for eating just about anything, and travel to shallow waters to mate, so you may see one of these on the beach if you’re not too careful. One thing for sure, you definitely don’t want to wake up with this thing on your bed.

Large, tan, hairy, and sporting enough appendages to give an octopus a run for his money, the camel spider looks like something straight out of hell. Ironically, the camel spider is not a spider at all, but in fact, a scorpion. Nevertheless, these creatures can reach lengths of up to 15 cm (6 in) and have powerful jaws which can be up to 1/3 of their body length.

Considered the most damaging snail in the world (because it consumes at least 500 different types of plants), this slimy, gelatinous, slider can reach up to 20 cm (8 in) in length and 10 cm (4 in) in diameter (about the size of an average sized adult fist). Would anyone want to see one of these slithering into their bed, I think not.

This guy may not be all that big, but you definitely don’t want to find him in your bed. They are called bullet ants but not because they look like bullets, but rather because their bite is so intense, that it supposedly feels like you’ve been shot. Getting a bite from one of these isn’t exactly the best way to wake up in the morning.

Isopods normally grow to be 1 to 5 cm. However, the giant isopod (a perfect example of deep-sea gigantism) can reach sizes between 19 and 36 centimeters. A terror from the deep to haunt your dreams? Yup, pretty much. Luckily, these terrifying creatures are more likely to be found at the bottom of the ocean, rather than in your bed.

To begin with, you probably wouldn’t find just one of these on your bed, rather you’d find a whole hive. Psychotically aggressive, compulsively over-protective, and boasting of a pathological sadistic bent (not really, but it definitely seems like it), these flying killers have no problem eliminating any living being they come into contact with. Seriously. While Africanized bees have the same stinging power as any other species of bee, these bees have been known to aggressively chase humans for up to a quarter mile at times, earning them the nickname “killer bee.”

So you thought leeches only resided in water? Well, think again. The Japanese Mountain Leech hunts on dry land quite comfortably, and rest assured, this slimy looking thing is after your blood. These leeches have 5 pairs of eyes and can be found in the tropical/subtropical regions of the Indian and Pacific Ocean.

If you see one of these hanging around, do not make it angry! The milkweed grasshopper, commonly found in Africa, feeds on poisonous milkweed and various extremely toxic plants. They then use the toxic liquid to spew at enemies (Or you if you’re too close) from openings near its hind legs when threatened. You have been warned.

Why would anyone want to share their bed with a creature that lays eggs in people’s skin? That’s right, no one wants to. And this horrid creature does just that. Found in parts of Central and South America, this creature lays its eggs on a mosquito or other fly, and waits for the insect to land on a mammal, or human. Once the eggs are laid onto the human skin, the eggs then burrow down into the skin and create a hole in order to breathe. The larvae continues to grow they begin forming into large boils underneath the human’s skin, causing immense pain.

This particular spider is one that many of us may be familiar with. These spiders can be found all throughout North America and pack a nasty bite. Their venom can lead to nausea, muscle aches, and paralysis of the diaphragm; However, a bite is rarely fatal unless you are a small child or an elder. Regardless of whether or not their bite can kill you, this is definitely not a spider you’d want to find in between your sheets.

The Brazilian Wandering Spider, also known as the Banana Spider, is one of the most venomous spiders on Earth. Guinness Book of World Record’s named it the world’s most venomous spider for multiple years, and their bites are deadly to both children and adults. All species of this spider live in Brazil, although they can be found in various places throughout Latin America. So am I the only one wondering why this spider is on this person’s arm?!

A tsetse fly, which can also be spelled tzetze fly, is the carrier of the deadly “sleeping sickness” disease. The tsetse fly is a small biting fly that should definitely be feared. Sleeping sickness is a disease that can cause multiple symptoms such as loss of sleep, personality changes, problems with coordination, and if left untreated, death. If you see this on your bed, be sure to kill it before it kills you. (Note: sleeping sickness is treatable with today’s medicine if caught early.)

Small and relatively common in our everyday world, you might be wondering why this small creature is on this list. When you realize that this vile insect is responsible for the spread of all sorts of diseases including yellow fever, dengue fever, malaria, and the West Nile virus, a particular mistrust to this creature is wise. With over 3,000 different species of mosquito, they have transmitted more disease than any other creature.

Usually larger than 25 mm (1 in), the dobsonfly is a freaky looking fly for sure. While this humongous fly might look like it could have you as its next snack, the male dobsonfly cannot bite at all and is therefore harmless to humans. While the females can inflict a rather painful bite when being disturbed, they mostly stick to tadpoles, small fish, and other small aquatic creatures for their meals.

Ironically named bed bug, you don’t want this anywhere near your bed….nowhere near. Not only do they exclusively feed on your blood (not just one but many at a time), but they also reproduce fairly quickly. An individual bed bug can lay 200-250 eggs in her lifetime with eggs hatching in about 6-10 days. Not to mention, once you have these in your bed, they are incredibly difficult to get rid of, usually resulting in having to throw away your entire mattress.