So what is Floyd Mayweather’s net worth? It’s a lot. The American boxer loves making money so much that his placeholder middle name is simply “money.” Floyd Mayweather Jr. also goes by the nickname “Pretty Boy” because no one is able to touch his face in the ring, but we’ll get to his incredible professional boxing record in a minute.

First, let’s take it back to his years as a toddler. His father, Floyd Sr., introduced him to the boxing gym not long after he started walking. He would hold Floyd Jr. in front of the speeding bag and let him free. When he was just 7-years-old, he was fitted for his first pair of boxing gloves. 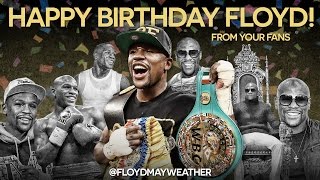 Unlike Conor McGregor’s harden childhood, Floyd’s early years were good, but as he grew older, his home life became unstable. His father had a violent temper and in 1993 he was sentenced to prison on a cocaine trafficking charge. Mayweather’s mother, Deborah, struggled with her own substance abuse issues as well.

Floyd found peace in the ring. He won the national Golden Gloves in 1993, 1994, and 1996. Like Eminem dominating the charts in his early years, Floyd Mayweather dominated his amateur career with 84 wins and just 6 losses and earned his “Pretty Boy” nickname because no one could touch his face in the ring. From then on, Floyd Mayweather’s net worth began to raise.

One year later, he had one of the biggest fights of his career against Oscar De La Hoya. He won by split decision and captured the WBC light middleweight title. He was the Bill Gates of the ring: no one could touch him and he was successful in every fight.

Mayweather is 50-0 in his professional boxing career, and when you’re literally perfect at your job, you’re going to make a lot of money. No one knows exactly what Floyd Mayweather’s net worth is, but it’s estimated to be around $700 million.

Some reports claim he could be a billionaire, but with how fast he spends his money, that probably won’t last too long. He’s constantly flaunting his wealth on his various social media accounts. He has a $60 million private jet, if you were wondering.

In his last fight against UFC fighter Conor McGregor, Mayweather earned around $275 million…FOR ONE MATCH!