Devastating Things That Have Happened On Christmas Day

Christmas is supposed to be a time of peace. Sadly, a great many devastating things have happened on Christmas Day. For people around the world, it’s the one time to be with family, the one time for hope, and love, and thanksgiving. Unfortunately, as we’ll soon find out, that hasn’t always been the case. Some people have experienced disturbing and horrible events on this holy day, drastically changing their lives for the worse. Instead of presents wrapped in cheerfully decorated paper, they received misery wrapped in more misery with a bow of despair. That’s dark. I know. I’m laying it on thick because this list isn’t for the faint of heart. So, get out the tissues and prepare yourself for some of the most shocking Christmas tragedies Ever. On the December 26th 2003, a powerful 6.7 earthquake (according to the United States Geological Survey) rocked the ancient Iranian city of Bam. Even though the earthquake only lasted about 8 seconds, it managed to kill over 26,000 people and destroyed around 70 to 90 percent of the residential areas. Speaking of earthquakes, in 2004 one of the most powerful earthquakes ever recorded at 9.1 on the richter scale triggered one of the most devastating flooding events ever. The Boxing Day Tsunami ended the lives of nearly 230,000 people in a matter of hours. Places like the city of Banda Aceh were engulfed in 100-foot walls of rolling water. Buildings stood no chance against such destructive force.

Considered one of New Zealand’s worst train crashes ever, this catastrophe took place on the Christmas holiday of 1953. Somewhere around 10:30 PM on Christmas Eve, an express passenger train carrying about 285 people passed onto a bridge above the Whangaehu River. However, no one noticed that a flash flood had washed away the bridge’s supports a few minutes prior. Sadly, as the train crossed the bridge, the structure gave way, plunging all five second-class carriages, and one first-class carriage, into the river. In all, 151 people were killed. 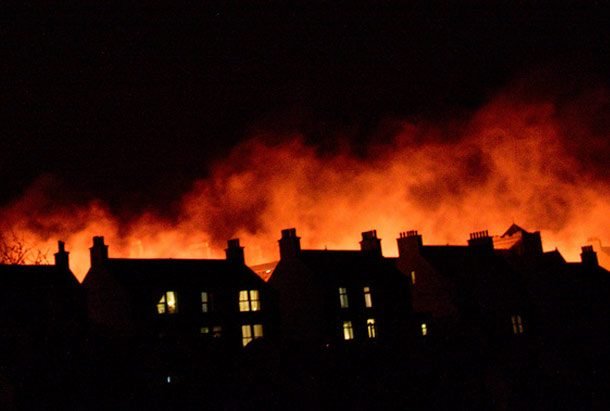 It’s sad that a holiday like Christmas can be tainted by racist hate, but alas, it can. A perfect example happened a few days before the Christmas of 1896 where the citizens of Mayfield, KY witnessed a flat-out Christmas Race War between white citizens and African Americans. Roughly 250 armed African Americans sought revenge for the lynching of Jim Stone among other racial injustices. So, they took to the streets with violence. White people were encouraged to stay in their homes as bullets filled the streets. Surprisingly, only three people died. Christmas day of 1974 witnessed the most destructive cyclone to ever hit Australia. Cyclone Tracy barreled through the unsuspecting city of Darwin destroying roughly 70 percent of the town. The devastating cyclone killed an estimated 71 people and left $500-600 million dollar worth of damage (that would be about 2.5 to 3 billion dollars today). Roughly 30,000 people were left homeless with only six percent of the houses still standing. What is considered to be the deadliest stampede in American history took place in the little copper-mining town of Calumet, Michigan. It all started in the backdrop of a bloody and violent strike from the region’s 9,000 unionized copper miners. On the Christmas eve of 1913, the union- Western Federation of Miners-hosted a Christmas party for the strikers’ children at the Italian Hall in Calumet. What was meant to be a break from all the fighting quickly turned into a horrifying event when an unknown person yelled, “Fire” in a room packed with 700 people and 400 children. The panicked crowd crammed the narrow exit passageways in an attempt to get out of the building. 73 people – including 59 children and 13 women – were killed in the resulting stampede. The worst part: there was no fire. JonBenét was a six-year-old beauty queen that should have been enjoying Christmas like any other six-year-old. But on December 25, 1996, this beauty queen disappeared only to be found dead eight hours later, hidden under a white blanket. With no signs of sexual assault, scraps of evidence, or even a forceful entry into the house, this case has been one of the most mysterious still in existence. The culprit has never been caught and is possible they could still be alive today. On Christmas Eve 1994, Air France Flight 8969 was boarded by four men heavily armed with machine guns, dynamite, and homemade grenades. The hijackers were members of a violent militant Islamic sect and were protesting for the establishment of a Sharia state in Algeria. The hijacking resulted in a standoff which lasted for two days and saw the death of three innocent people. It could have been worse, however, if it wasn’t for the French Special Forces storming the grounded plane and killing the hijackers. Reports say that the hijackers’ ultimate plan involved flying the plane to Paris and exploding it over the Eiffel tower, killing everyone on board and potentially hundreds more on the ground. In what has been dubbed as one of the worst and darkest events in North Carolina’s history, the Lawson Family’s Christmas tragedy is simply put, sick. On December 25, 1929, Charlie Lawson cold-heartedly killed most of his family. He started with his two daughters whom he shot with a shotgun, then bludgeoned them to death. After that, he shot his wife and he found Marie, the oldest, baking a cake. He shot her as well. The two younger brothers, James and Raymond, were hiding from their father to no avail. He shot them, too. Lastly, he found baby Mary Lou whom he bludgeoned to death before killing himself. The only survivor of this tragedy was the oldest son, Arthur, who had been sent by his father on an errand the night before the killing. None of these stories are heartwarming…I know. However, probably the most heartbreaking Christmas tragedy (in my opinion) is this one. Between the dates of December 24 and January 13th, the Combatants of the rebel Lord’s Resistance Army (LRA) ruthlessly slaughtered at least 620 civilians and abducted more than 160 children in the northern Democratic Republic of Congo. The majority of the killings and abductions took place between December 24th and 25th. In other words, these heartless monsters took it upon themselves to end the lives of 620 innocent civilians on Christmas Eve and Christmas day. “The LRA went in intending to kill and they left few survivors,” said Anneke Van Woudenberg, senior researcher at Human Rights Watch. I don’t know about you, but I hope there’s a special place in hell for these people.