While the topic of mental illness has been in the headlines recently with the deaths of Anthony Bourdain and Kate Spade, more often than not, it’s swept under the rug and ignored. Mental disorders affect peoples’ thinking, mood, and feelings, and depending on the severity, can be debilitating for their quality of life. Every person experiences it differently, and there’s a wide array of mental illnesses, like anxiety, depression, and bipolar disorder. Just like the variety of conditions, there’s also no one easy way to treat mental illness. It can be a lifelong journey for some. Still, as we’ll soon discover, people who seek out and receive treatment are much better off than those that don’t. We think after hearing these 25 Shocking Mental Illness Facts You Won’t Believe, you’ll find this a problem we can no longer ignore.

If you or someone you know struggles with mental illness and has had suicidal thoughts, seek help. The National Suicide Prevention Hotline provides 24/7 free and confidential emotional support: 1-800-273-8255

Of the mental illnesses, anxiety disorders rank the highest in the United States with 40 million adults (18.1% of the population) suffering from them. 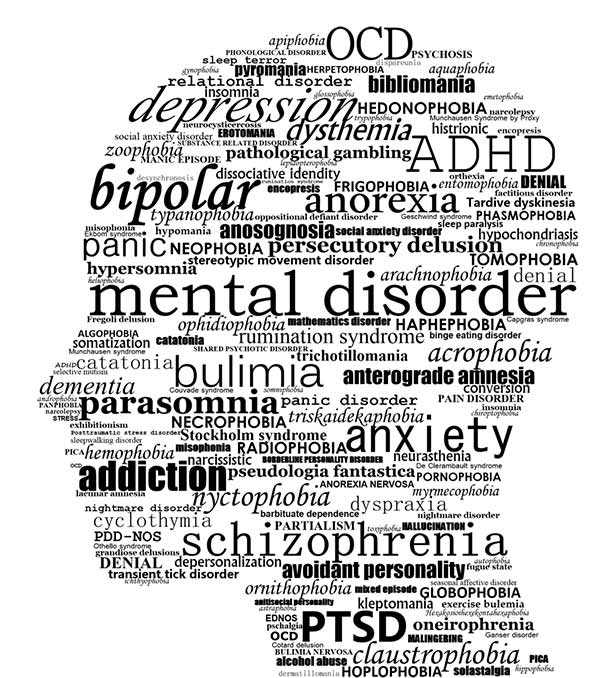 According to the CDC, studies have shown that 50% of American adults will develop at least one mental illness in their lifetime. In the United States, mental disorders have a higher prevalence in the southern states in comparison to the rest of the country. For example, depression estimates in Mississippi were 13.7% in contrast to North Dakota's 4.3%. 8.3 million adults ages 18 and older have reported having suicidal thoughts. According to WHO, suicide accounts for 800,000 global deaths a year. It's the second leading cause of death for people 15 to 29 years old. Soldiers who have gone off to war or people who have lived through a major disaster are twice as likely to have a mental disorder. In a recent study, 487,700 people were treated at emergency facilities for self-inflicted injuries. People with mental illness face two great challenges: the disease and the social stigma that comes with it, which can rob them of good jobs, safe housing, and satisfactory health care. Many people with a mental illness are afraid of the stigma attached. Only 44% of adults with a mental disorder actually receive treatment. However, many studies have shown genetics, brain defects or injury, prenatal damage, abuse and trauma, or exposure to toxins play a larger part in mental illness than choices made by individuals. Worldwide, human rights violations are rampant against people with mental illness, including unwanted restraint, denial of basic needs, and lack of privacy. Few countries have laws put in place to protect them. Not just adults are affected. Roughly 3.1 million young people aged 12 to 17 had a major depressive episode in 2016. Of these countless young people, the prevalence was found higher in females (19.4%) in comparison to males (6.4%). According to the World Health Organization, around 20% of the children in the world have a mental illness or disorder. Even more troubling, most low to middle income countries only have one psychiatrist for every 1 to 4 million people. In a 2015 study reported by the CDC, 15.8% of high school students reported they considered attempting suicide. Many experts believe there is an acute mental illness crisis brewing among the current young generation and that 80% of them aren't receiving treatment. According to a study published in EMBO Reports, the total direct and indirect economic cost of mental illness was $2.5 trillion in 2010. Notably, the direct costs, such as getting actual healthcare treatment, were significantly lower at $0.8 trillion than the indirect costs which were $1.7 trillion. Increasing the availability of mental health services isn't as costly as one might think. According to WHO, low to middle income countries increasing their spending to $2 to $4 dollars per capita is all that's needed. Despite the increasing need for mental illness care, health insurance companies continue to skimp on coverage according to a recent study by Milliman, a risk management and health care consulting company, forcing many individuals to pay out of pocket. Untreated mental illness can be devastating to families, causing a spiral down effect that only gets worse and more challenging. Children are often isolated from their peers due to stigma, and struggling parents may be unemployed for long stretches of time. Despite the need for increased spending on mental illness issues, the latest Fiscal Year 2019 budget proposal slashed the Department of Health and Human Services budget by $17.9 billion. Naturally, proper health care and treatment is vital in helping the issue. According to WHO, 70 to 90% of mental illness patients that sought proper treatment saw a significant reduction in symptoms. The benefits of treating mental illness greatly outweigh the costs of ignoring it. According to a recent study, for every dollar spent on treating mental disorders the return on investment could be fourfold.