We have already published a few posts about some of the weirdest, largest or most dangerous dinosaurs and prehistoric creatures that went extinct millions years ago but in fact, some of these ancient animals are still around. With no or just little changes to their prehistoric appearance and behavior, some of these creatures can be found even in the modern world. From scary descendants of deep-sea prehistoric sharks to a 120 million-year-old ant, check out these 25 prehistoric animals that are alive today. Officially known as Triops longicaudatus, tadpole shrimp is a freshwater crustacean that resembles a miniature horseshoe crab. It is considered a living fossil because its basic prehistoric morphology has changed little in the last 70 million years, exactly matching the bodies of their ancient ancestors that inhabited Earth as early as some 220 million years ago. Lamprey is a jawless fish characterized by a toothed, funnel-like sucking mouth. Although they are well known for boring into the flesh of other fish to suck their blood, in fact only a minority of the 38 known species do so. The oldest lamprey fossil found in South Africa dates back to some 360 million years ago but its striking resemblance with the modern specimens is indisputable. Native to North America and northeastern Siberia, the sandhill crane is a large, up to 10 pounds (4.5 kg) heavy bird. A 10-million-year-old fossil from Nebraska is thought to belong to a sandhill crane specimen but scientists are not sure if it was the very same species. However, another crane fossil dating back to 2.5 million years ago unequivocally belongs to the sandhill crane. Occupying subtropical, temperate and sub-Arctic rivers, lakes and coastlines, the sturgeon is sometimes referred to as “primitive fish” because its morphological characteristics have remained almost unchanged since the earliest fossils some 200 million years old. Unfortunately, over-harvesting, pollution, and other kinds of habitat destruction have made this fish critically endangered with some species being at the very edge of extinction.

The largest salamander and amphibian in the world, the Chinese giant salamander can reach a length of up to 180 cm (5.9 ft). As a living part of the Cryptobranchidea lineage which dates back to 170 million years ago, this unique creature is also listed as a critically endangered species due to habitat loss, pollution, and over-collection, as it is considered a delicacy and used in traditional Chinese medicine. Discovered in 2000 in the Amazon rainforest in Brazil, this ant species is notable for its unusual morphology. Belonging to the oldest known distinct lineage to have diverged from the ancestors of all other ants, the martialis heureka ant is estimated to have roamed our planet for about 120 million years. Measuring up to 4 m (13 ft) long when mature, the goblin shark is a rare, poorly understood species of deep-sea shark. Its bizarre, scary appearance suggests the creature has its origins in prehistoric era; the first direct ancestors of goblin shark lived as early as 125 million years ago. Despite the frightening look and large size, this shark species is practically harmless to humans. Horseshoe crabs are marine arthropods that live primarily in and around shallow ocean waters on soft sandy or muddy bottoms. Considered the closest relative to the legendary trilobite, horseshoe crab ranks among the most well-known of the living fossils, having remained virtually unchanged for an astonishing 450 million years. Together with the platypus, echidna is the only surviving extant mammal that lay eggs. Scientific studies suggest that echidnas split from platypuses between 48 and 19 million years ago. Their common ancestor was aquatic, but echidnas have adapted to life on land. Due to its very unusual appearance, the echidna was named after the “Mother of monsters” in Greek mythology.

Endemic to New Zealand, tuataras grow up to 80 cm (31 in) long and are marked by a spiny crest along the back, especially pronounced in males. Though they look like modern-day reptiles and lizards, they have a body structure that scientists believe has remained basically the same for 200 million years. For this reason, tuatara is of great interest in the study of the evolution of both lizards and snakes.

Occupying depths of 50–200 m (160–660 ft) of the Atlantic and Pacific Ocean, the frilled shark is another scary-looking marine living fossil. This shark species belongs to one of the oldest still-extant shark lineages, dating back to at least the Late Cretaceous (95 million years ago) and possibly even the Late Jurassic (150 million years ago). 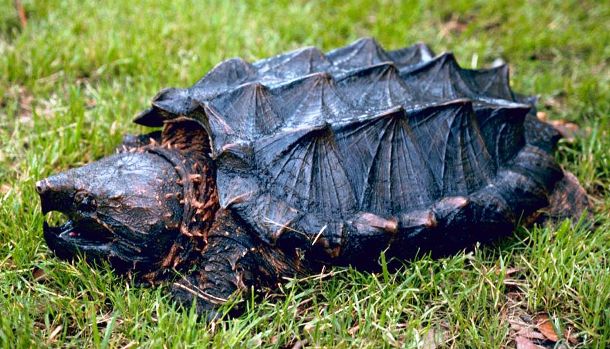 Found primarily in southeastern United States waters, alligator snapping turtles are one of two extant genera of the Chelydridae, a prehistoric turtle family with a long fossil history starting as early as the Maastrichtian stage (72 – 66 million years ago) of the Late Cretaceous period. Weighing in up to 400 pounds (180 kg), the alligator snapping turtle is the heaviest freshwater turtle in the world.

Native to the coastlines of the Indian Ocean and Indonesia, coelacanth is an order of fish that includes two extant species in the genus Latimeria. Considered extinct until it was rediscovered in 1938, they are more closely related to lungfish, reptiles and mammals than to the common ray-finned fishes. It is believed that coelacanth evolved into roughly its current form approximately 400 million years ago. One of the largest freshwater fishes in the world, the giant freshwater stingray grows upwards of 1.9 m (6.2 ft) across and may reach 600 kg (1,300 lb) in weight. Its thin, oval pectoral fin disc is estimated to have evolved about 100 million years ago. Like most of the animals on the list, this species also faces extinction due to fishing pressure for meat, aquarium display, and habitat degradation. Inhabiting deep slopes of coral reefs of the Indian Ocean, and the western and central Pacific Ocean, Nautilus is a pelagic marine mollusk. Fossil records indicate this creature has been living on Earth for incredible 500 million years which means it has survived several mass extinctions and great changes of the planet. But again, it is now when this species is probably closest to being wiped out forever due to heartless human activity and overfishing. Found in every ocean, from the surface to the deep sea, jellyfish might have settled world´s seas as early as 700 million years ago, which makes them the oldest multi-organ animals. Jellyfish is probably the only species on the list whose populations may be expanding globally as a result of overfishing of their natural predators. However, there are also some endangered jellyfish species. 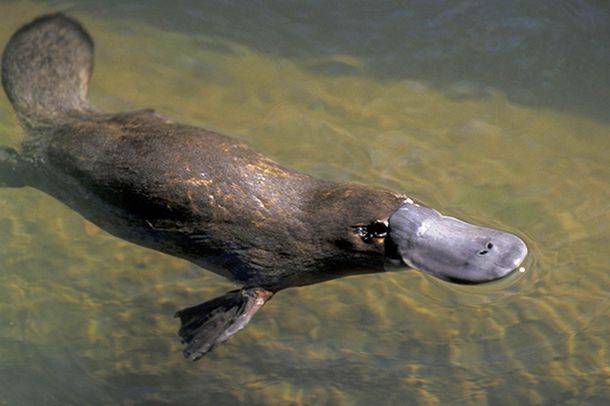 This egg-laying, duck-billed, beaver-tailed and otter-footed mammal is often regarded as the weirdest animal in the world. No wonder this unusual appearance has its roots in the prehistoric era. While the oldest discovered fossil of the modern platypus is just about 100.000 years old, the first platypus ancestors occupied the supercontinent of Gondwana some 170 million years ago. Widely distributed across the southern part of Africa, elephant shrews are small, quadrupedal mammals resembling rodents or opossums but, ironically, are more closely related to elephants, as the name suggests. According to the fossil records, the first ancestors of this bizarre creature lived in Paleogene (66 – 23 million years ago). Surprisingly, these large water birds characterized by a massive, long beak, are among the living fossils that have changed the least since the prehistoric periods. The fossil records show that the pelican lineage has existed for at least 30 million years. Found in Early Oligocene deposits in France, the oldest pelican fossil is strikingly similar to their modern form with the beak morphologically identical to the one of current pelicans. One of the largest freshwater fishes in North America, Alligator gars are often referred to as “primitive fishes” or “living fossils” because they have kept some morphological characteristics of their earliest ancestors such as spiral valve and the ability to breathe both air and water. Fossil records trace the existence of the gar to over 100 million years ago. It’s hard to measure exactly how long sea sponges have been around since estimates vary greatly but the oldest evidence of a sea sponge seems to be a fossil recently discovered in a 760-million-year-old rock. Meaning “slotted-tooth”, solenodons are venomous, nocturnal, burrowing, mammals. Endemic to a few Caribbean countries, this little creature has often been called a living fossil because it has been around virtually unchanged for the past 76 million years, keeping the primitive mammal characteristics typical of their prehistoric ancestors. Unlike solenodons and many other animals in this list, the crocodilians do resemble the dinosaurs. Including crocodiles, alligators, caimans, gharial and false gharial, this group appeared about 250 million years ago in the Early Triassic period and their modern members still share many morphological features with their ancient ancestors. Thought to be extinct until 2012 when it was rediscovered, the pygmy right whale is the smallest of the baleen whales. Since it is a very rare animal, little is known about its population or social habits. What we do know, however, is the fact that pygmy right whale is a descendant of Cetotheriidae, a family of baleen whales thought to have existed from the Late Oligocene to the Early Pleistocene (28 – 1 million years ago). Even frogs have some living fossils among them. Similarly to the pygmy right whale, the Hula painted frog was also thought to be already extinct until its rediscovery in 2011. The frog was originally known to have existed for 15,000 years, however, based on phylogenetic analysis, it was estimated that the last direct ancestor of this species lived approximately 32 million years ago, making the Hula painted frog the only extant representative of the genus.