ShareTweet
Pinterest
Ever walked by an ashtray and suddenly want to dig in? No? Neither have we, but believe it or not, it happens! Turns out, some people have the strangest eating addictions, and some people get into really weird “culinary” accidents. While we don’t recommend reading this list while you’re eating dinner, you’ll want to check out these 25 Most Unbelievable Non-Food Items People Have Actually Eaten! 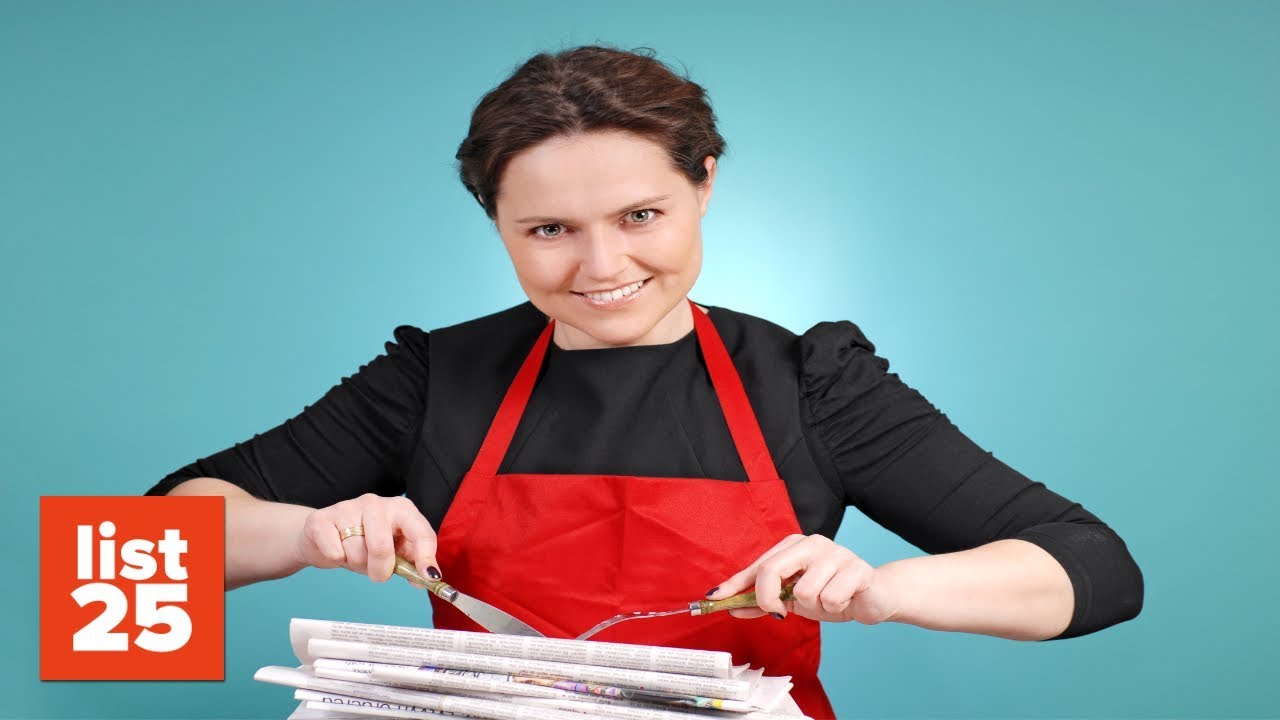 Remember that kid who always ate paint in elementary school? Well, chances are he’s probably not the brightest crayon in the box these days. That’s because ingesting paint can cause lead poisoning, which can lead to irreversible brain damage and slow physical and mental development in children. In all seriousness, eating paint or paint chips can adversely affect both children and adults and even lead to death in serious cases.

As a nursing major, Florida native Tempestt should’ve known better than to eat soap. The 19-year-old ate as many as five bars of soap a week during a stressful time in her life, ignoring both the warning labels and her medical knowledge just to get a fix. However, she experienced a change of heart, sought help for her addiction, and hasn’t eaten soap ever since. Ironically, she’s never been cleaner.

A 22-year-old woman named Krystin used to lick chalk as a child, but her craving for it soon led her to secretly ingest it. When she recently revealed her secret addiction to family and friends, she asked them if they would try it. None of them liked it. Go figure.

Attention from the media was not the only thing a Portland family attracted when they rushed their toddler to the emergency room. The little girl, who had been experiencing severe stomach pain, swallowed 37 “Buckyball” magnets that tore three holes in her lower intestine and one in her stomach. When doctors initially examined the x-ray, they thought she had ingested a bracelet, but it was actually the magnets that had formed a ring in the girl’s stomach.

Whether unintentionally or on purpose, more than 3,500 Americans swallow batteries each year. Doing so can lead to serious health problems such as renal failure should the mercury within the battery escape into the bloodstream. If left in the stomach for too long, gastric acids will eventually corrode the battery’s outer layer and cause mercury poisoning. Due to the large number of illnesses caused by battery ingestion, they are now designed to be more acid resistant.

The drinking of urine, also known as urophagia, has been around since ancient times when people did it for various health, healing, and cosmetic purposes. These days, it seems like only Bear Grylls from “Man vs. Wild” actually partakes in this bizarre ritual. While some sources claim that urine can be consumed for survival purposes in the absence of any other fluids, numerous credible sources (including the US Army Field Manual) advise against it.

An Ohio man named Josh read a book about glass-eating and decided to try it himself. In just four years, he has consumed more than 250 light bulbs and 100 wine and champagne glasses. He says he enjoys ingesting it because it gives him a “warm feeling,” but admits that he is more addicted to the attention he receives for eating glass than the act itself.

A woman featured on the TLC show “My Strange Addiction” confessed she eats half a roll of toilet paper a day. She said she enjoys the way it feels when it touches her tongue and even snacks on it at the movies instead of popcorn.

One 35-year-old woman found herself becoming unusually attracted to the scent of dryer sheets. She couldn’t resist the urge to bite into one of the sweet-smelling sheets and soon started to eat them on a regular basis. These days, she consumes as many as eight per day and claims to suffer from withdrawals if she doesn’t get her fix because eating them helps her relieve stress. However, the chemicals that give the sheets their fragrant scent are terrible for her health. On the bright side, her insides must smell fabulous.

A woman named Crystal has been eating glass cleaner up to 10 times a day for more than 30 years. The scent of the cleaner made her mouth water as a child, so she decided to taste it. She says the substance’s grainy texture is “satisfying.”

A woman named Bianca began eating pottery as a child, but her desire to ingest non-food items soon expanded to an even less appealing substance – cigarette ashes. She claims she became addicted to them because they taste “salty” and “gritty.” Because she does not smoke, Bianca relies on her older sister’s cigarette ashes to feed her addiction.

A Florida woman named Adele has discovered the ultimate comfort food – couch cushions. In her lifetime, she has eaten over 200 pounds of the fluffy stuff, which means she has ingested enough cushioning to stuff seven couches and two chairs.

An Ethiopian man ate an assortment of metal objects weighing in at more than 1.6 pounds. Nails, keys, batteries, and door keys were found among the objects the man had swallowed over the course of two years. Miraculously, none of the nails perforated his internal organs and his surgery was a success.

For most people, mothballs conjure up images of grandma’s winter sweaters. However, mothballs have been known to provide a narcotic effect if misused. Naphthalene, one of the active ingredients, can cause harm if inhaled or ingested and can be especially dangerous for children who mistake mothballs for candy.

Some prisoners would rather be anywhere than in jail – even in the hospital. The inmates at Central Prison in Raleigh, North Carolina, regularly swallow items in order to escape for just a few days. Several prisoners have eaten bed springs in the hopes of making a trip to the hospital.

While choosing out an engagement ring for his girlfriend, an English man swallowed the ring he was looking at and tried to convince the sales clerk that he had given it back. Police determined what really happened after a quick x-ray of the man’s stomach, and the ring was returned to the jeweler a few days later. However, it will not likely sell at full retail value after everything it’s been through – literally.

Over the course of 10 years, a 62-year-old Frenchman managed to swallow $650 worth of Euro coins. His family said the man would steal coins while visiting others’ houses and save them as a snack. Needless to say, they quickly accumulated in his stomach until he had eaten a staggering 12 pounds worth of coins. The surgery required to remove them from his stomach cost more than the amount he had ingested. Perhaps he should’ve invested his money more wisely.

A Chinese woman swallowed more than 20 cobblestones during a fight with her boyfriend. She thought the stones would eventually pass through her system, but when that didn’t happen, she had to undergo surgery to remove them. Why she thought swallowing cobblestones would help her win an argument is another matter entirely.

A 24-year-old Israeli woman somehow accidentally swallowed a toothbrush when she leaned over the sink to brush her teeth. The toothbrush didn’t show up on the x-ray when she went to the hospital, so the doctor sent her home. When she awoke in severe pain the next day, she went to another hospital to seek a second opinion and doctors realized that she had indeed swallowed the object, which was promptly removed endoscopically.

A Desert Storm war veteran made an appearance on an episode of “Untold Stories of the E.R.” after swallowing razor blades on a dare. He may have thought he was being cool and tough, but razor blades can perforate the bowel and cause major damage when ingested. Plus, the only way to remove them is through surgery or an uncomfortable endoscopy procedure.

No matter how stupid a fad diet may be, at least one person will always be willing to try it. One fad diet called The Tapeworm Diet involves ingesting infected beef carcass followed by a tapeworm. After a certain amount of time, the dieter takes medication to kill the body’s new resident. However, that doesn’t change the fact that the patient intentionally swallowed a tapeworm in the first place.

While experimenting with a “special type of passionate kiss,” an elderly woman accidentally swallowed her lover’s dentures. Fortunately, she did not require surgery.

A Cockroach and A Fork

An Israeli woman was cleaning her home when a cockroach jumped into her mouth. In an effort to remove the insect, she stuck a fork down her throat and accidentally swallowed that too. The fork became lodged in her stomach and had to be surgically removed, but she successfully digested the cockroach.

Goodness gracious great balls of…hair? An 18-year-old Chicago woman learned the hard way that the human stomach cannot digest or pass hair. Doctors surgically removed a 10-pound hairball from her stomach that measured more than 15 inches in length. The girl admitted that she had been eating her hair for years but quit cold turkey after the surgery.

Most of us love our relatives to death, but this woman takes that expression to a whole new level. After the sudden loss of her husband, the 26-year-old widow was transferring his remains from a temporary box to a memorial urn when some of the ashes landed on her hand. Not wanting to disrespect his memory, she decided to ingest the ashes instead of just brushing them off. That small act led her to developing a taste for her late husband’s ashes, which she now consumes on a daily basis. The addiction is so serious that she takes the urn with her wherever she goes.